SLSA dip — At the Source of the problem! 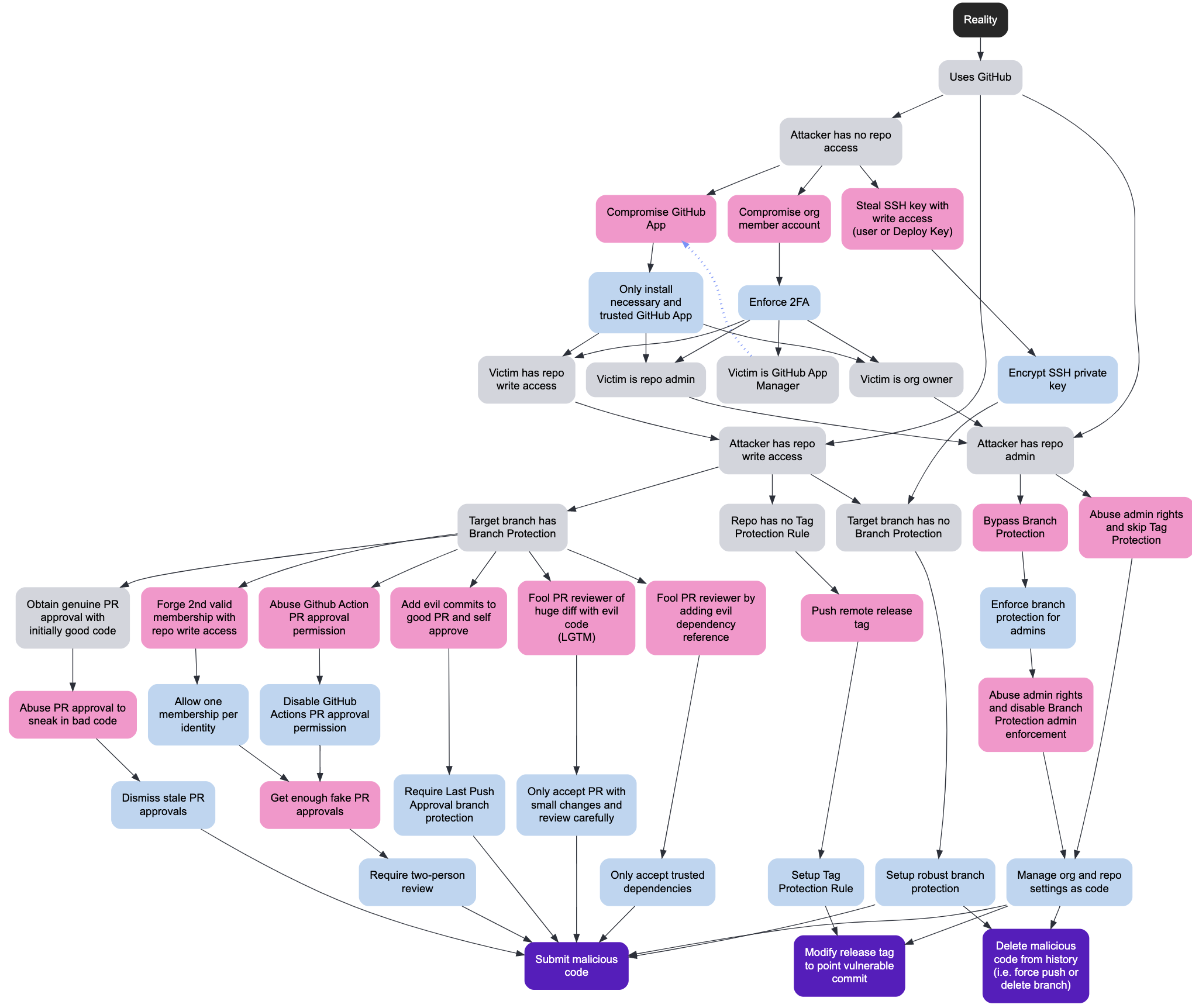 This article is part of a series about the security of the software supply chain. Each article will be analyzing a component of the Supply chain Levels for Software Artifacts (SLSA) model in depth, from the developer’s workstation all the way to the consumer side of the chain.

This article is focused on Source Control Management (SCM). Nowadays this is almost synonymous with Git, and for many organizations, that means GitHub. Of course, there are many more great options to store, version, and collaboratively edit source code. Some organizations might have stricter requirements and want to store their code within their perimeter. To that end, GitHub offers an on-premise variant of GitHub Enterprise and GitHub Enterprise Server, but there is also GitLab, BitBucket, Gitea, and many others.

We will initially focus on studying the different strategies for attacking GitHub. You should consider this to be a living article that is a work in progress and will continue to evolve. We will first look at the SCM from a Red Team / Attackers’ perspective and then from a Blue Team / Defender’s perspective. Finally, we will combine all those attacks and mitigations into an attack tree built using Deciduous, an open-source security decision tree tool.

To map out the GitHub Enterprise Cloud’s attack surface, we will use GitHub’s documentation. We’ve analyzed the attack surface relevant when considering all aspects of securing access to the source code. You will find all the links in the Appendix of this article.

We regroup all attacks by focusing on three malicious end goals (largely inspired by the SLSA threats catalog):

There are numerous ways to achieve those end goals. The attack scenarios can range from relatively simple to highly complex. If we consider an insider threat, there are even more scenarios, and their mitigations might be more difficult to implement, especially for employees with administrative access.

If there is no Branch Protection enforced on the target branch or it has a weak configuration that does not even enforce peer review, the attack will be successful.

— Review one’s own changes via a sock puppet account

In this attack, the attacker manages to convince an Org Owner to grant write access to the attacker’s GitHub account (potentially repeating this more than once to have multiple fake identities). Using this account, the attacker then submits malicious code by opening a Pull Request and approving their changes before anyone else notices. With remote work being increasingly common, and new employees joining companies without ever seeing their colleagues in person, this is an increasingly plausible scenario.

If the target organization was created before January 2022, the default settings for GitHub Actions grants the automatic token (GITHUB_TOKEN) the ability to approve pull requests. This allows an attacker to add a malicious GitHub Actions workflow alongside their malicious code changeset, which would be triggered when opening the pull request and could be set to approve the Pull Request immediately.

After the attacker submits a valid and good code change that is approved, the attacker abuses their existing approval to make further changes that include bad code while retaining the stale approval.

Another scenario is that the attacker could first be a good samaritan and approve the code of a fellow developer, let’s assume it’s a good code change, but it doesn’t matter. What matters is that once they have approved that pull request, they could abuse their own write access, add bad code and self-approve their own code change.

— Submit a change that is unreviewable

The attacker could submit their bad code as part of a huge changeset (with thousands of lines of code modified) and a lazy reviewer could conceivably review quickly and miss the bad code (i.e. LGTM).

Another option is for the attacker to add a new dependency that they in fact have full control over to a package manager manifest (such as package.json / package-lock.json, etc.). Let’s say they create a malicious library and submit it to NPM, unless the reviewer validates the new dependency they could sneak under the radar.

By compromising another account, they can achieve the same thing as with a sock puppet account, it’s just that this would be a legitimate, existing and potentially trusted senior employee account. Abusing the existing trust in this employee, others might not question the suggested changes as much.

Without necessarily being a large code change, the attacker could make their bad code change none obvious to the reviewer. This could either be a vulnerability class that the reviewer is not familiar with or the code logic could be confusing enough that it’s not clear how a vulnerable condition could be reached.

The attacker might just have a lucky break and find a lazy reviewer that has a tendency to review things very sloppily.

Assuming the attacker is a malicious insider with repository admin privileges or Org Owner, they could bypass the Branch Protection rule.

Another option is for them to temporarily disable the Branch Protection rule (or its enforcement on administrators).

Once an attacker has managed to submit their malicious code changes, they might reasonably want to attempt to hide their tracks by removing it from the source control history.

An attacker might be aware that the source code repository already contains a commit with a vulnerability they would be interested in exploiting if it were deployed to a production environment. Here we will make the assumption that the Build system is configured to build when a new tag with a certain pattern (ex. a semantic version like v1.2.3) is pushed. The attacker who otherwise would not be able to push code to the default branch, because it is subject to Branch Protection, but might still be able to push a remote tag that matches the expected pattern pointing to a malicious commit, which could also be in a branch that is not reviewed. On GitHub, by default, pushing tags simply requires repository write access.

In this section we will attempt to suggest mitigations to thwart the previously documented attacks or to minimize their impact.

The best mitigation is to set up the most robust Branch Protection possible.

Here is our recommendation:

The rule of thumb is to have a single organization membership per employee. This is difficult to do with normal GitHub accounts and that’s where enforcing SSO to your IdP using SAML or OpenID Connect might help.

Review your Organization setting for GitHub Actions and make sure that the Workflow permissions are set to prevent GitHub Actions from creating or approving pull requests using the automatic token.

— Submit a change that is unreviewable

Following the recommendations in the Initial Access section should help limit the risk of compromising other accounts, but there is no silver bullet.

While it’s not a bad idea to use SAST might help the reviewer to identify vulnerabilities, but the attacker would reasonably test that SAST would not detect their bad code. Enforcing a Two-person review Branch Protection rule might lower that risk even more, but ultimately if the attacker is really trying to fool you, they might succeed.

The attacker might carefully pick their reviewer, if they know they tend to be straight shooters that LGTM a little too fast, otherwise they might just get lucky and submit pull requests when people are tired. There is no good solution to this other than maybe audit pull request reviews, see those who tend to approve a little too fast and remind them to be more vigilant.

As discussed in the Initial Access > Insider Threat section, the best option is to limit the number of administrators and use configuration as code.

Otherwise, for administrators, as discussed in the Initial Access > Insider Threat section, the best option is to limit the number of administrators and use configuration as code.

Otherwise, for administrators, as discussed in the Initial Access > Insider Threat section, the best option is to limit the number of administrators and use configuration as code.

In this section we combine all the attacks and mitigations presented in the previous sections into an attack tree. We’ve used the amazing Deciduous tool to create it and we are happy to share it in this GitHub repository. Keep in mind that this is a living article and we plan on updating the attack tree as new techniques are discovered. We welcome community contributions.

This section contains numerous links back to GitHub’s documentation where we can find information about every single feature that could be abused or be used to harden the default configuration.

This article is part of a series about the security of the software supply chain. Each article will...